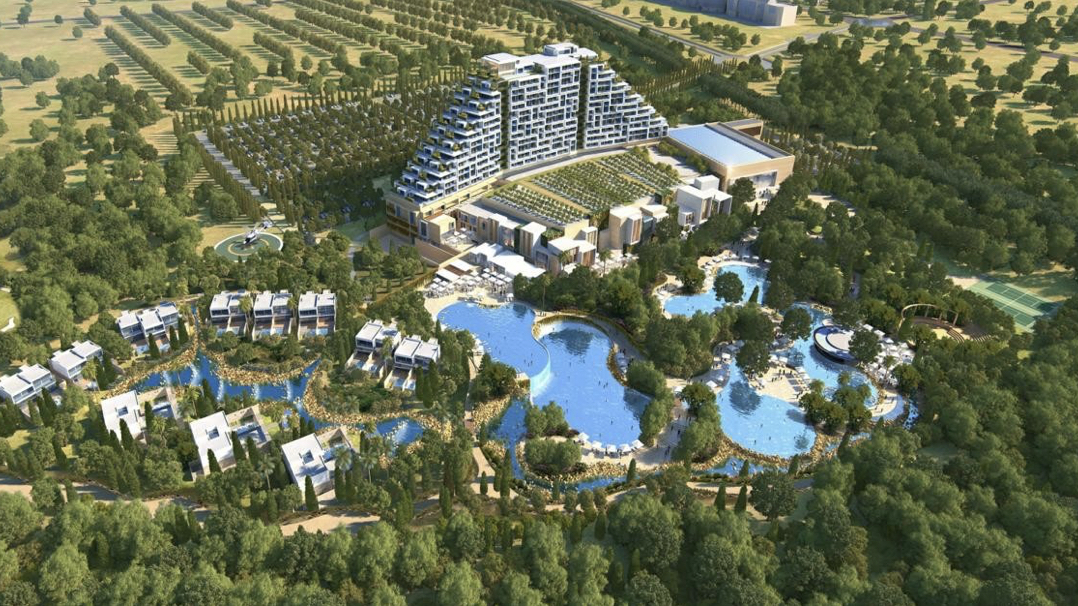 The City of Dreams Mediterranean casino hotel resort, which is owned by Melco Resorts & Entertainment Limited and Cyprus Phassouri (Zakaki) Limited, is paving its way and has already begun its materialization towards its 2021 opening, with the recent awarding of the construction to Avax – Terna Joint Venture and the construction of the water supply infrastructure.

The Integrated Casino Resort Cyprus Ltd (ICR), announced on the 2nd April 2019, that it awarded the construction of its City of Dreams Mediterranean Integrated Casino Resort to Avax – Terna Joint Venture, following a competitive tender and after it obtained all required approvals from the Government of Cyprus (https://in-cyprus.com/icr-cyprus-awards-construction-contract-for-city-of-dreams-mediterranean-to-avax-terna-j-v/).

The joint venture’s construction contract is valued at EUR 270 million(http://www.philenews.com/oikonomia/kypros/article/682115/gra-themelia-stin-kypro-apokta-i-terna).

The Chairman and CEO of Melco, Lawrence Ho, proclaimed that “the awarding of this contract marks the official beginning of the construction of City of Dreams Mediterranean and demonstrates our on-going commitment to the project as well as to Cyprus” (https://www.stockwatch.com.cy/en/article/emporika-nea/icr-cyprus-awards-construction-city-dreams-mediterranean-avax-terna-jv).

He continued and declared, “I am confident given the experience and success of both parties to the joint venture, that Avax – Terna will deliver the project to the highest construction standards and will enable us to bring an extraordinary ICR to Cyprus. We are happy to be working with established premier contractors, who has devoted efforts to the country and worldwide, to make this unique project a local reality”.

The Chairman of Avax, Christos Joannou, who spoke on behalf of the joint venture, said, “City of Dreams Mediterranean is a large-scale project that will drastically change the entertainment and tourism industry of both Cyprus and Europe. We are honoured to be taking up such an important project and we will work to deliver a high standard of quality within the agreed schedule” (https://in-cyprus.com/icr-cyprus-awards-construction-contract-for-city-of-dreams-mediterranean-to-avax-terna-j-v/).

AVAX SA was founded in 1985 and was listed on the Athens Stock exchange in 1994 (https://www.bloomberg.com/quote/AVAX:GA).

Terna SA is the construction company of the GEK TERNA Group (http://www.terna.gr/en/). It was founded in 1972, listed on the Athens Stock Exchange in 1994, and has been active in Cyprus since 2016.

Another recent development is the fact that on the 3rd April 2019, the government authorized the construction of water supply infrastructure of the resort’s casino and other major developments in the surrounding area, which will cost approximately EUR 2.5 million (https://www.kathimerini.com.cy/gr/oikonomiki/epixeiriseis/2-5-ekat-eyrw-i-kataskeyi-ydrodotisis-sto-kazino-theretro-sti-lemeso).

Additionally, the building permit was issued on the 3rd April 2019, to kick start the process.

It is important to note that the City of Dreams Mediterranean, will be built to the highest sustainability standards to adapt to the natural environment.

Most prominently, it will be the region’s and Europe’s largest Integrated Casino-Resort (http://www.financialmirror.com/news-details.php?nid=36763).

It will feature a 16-storey hotel tower with 500 guest rooms, including multi-bay suites with garden balconies, an exposition centre, an extensive “poolscape” area with four large outdoor pools, and amenities such as Jacuzzis, spa, health club and indoor pool, as well as a large children’s playground. It will also offer over 100 tables and 1,000 state-of-the-art slot machines (https://cyprus-mail.com/2019/04/02/tender-awarded-for-construction-of-city-of-dreams-casino-resort/).

The City of Dreams is expected to attract an additional 300,000 tourists per year to Cyprus, and it will create an estimated 4,000 local job opportunities, during the construction phase and approximately 2,400 permanent jobs, once it is fully operational (https://greece.greekreporter.com/2019/04/02/greek-company-to-build-europes-largest-casino-resort-on-cyprus-video/).

The Integrated Casino-Resort is expected to contribute approximately EUR 700 million per year to the Cypriot economy, after the second year of operation, amounting to circa 4% of the country’s annual GDP.