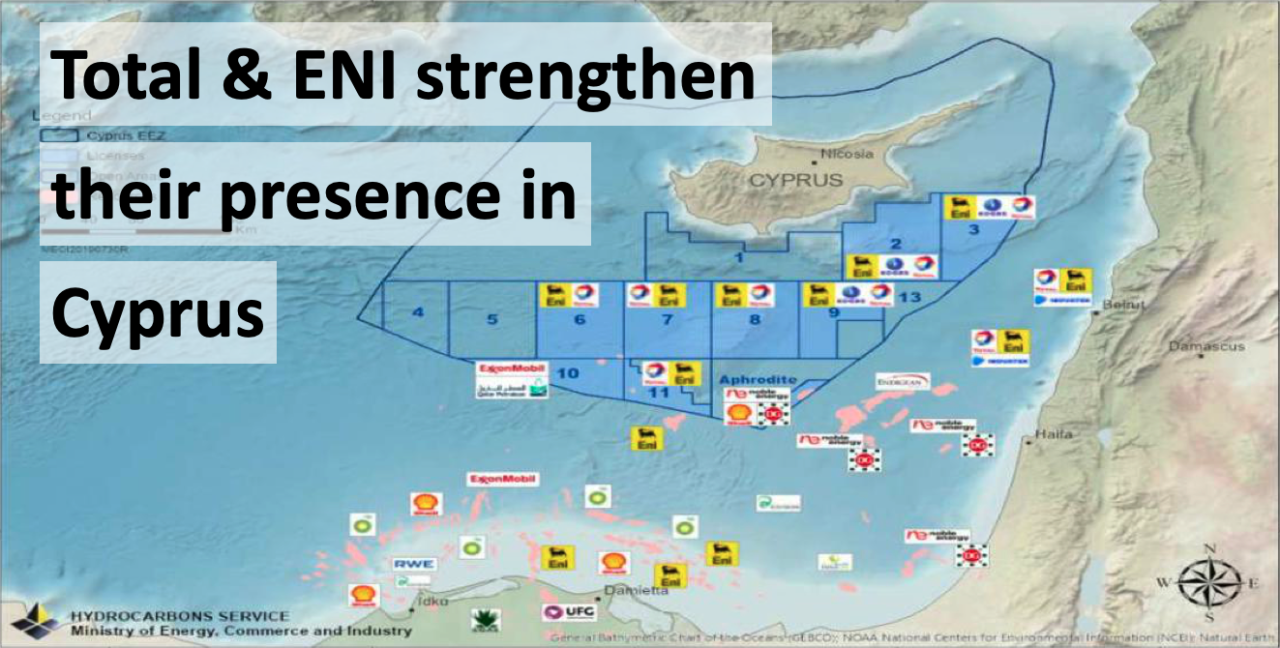 ENERGY GIANTS, TOTAL AND ENI, STRENGTHEN THEIR PRESENCE IN CYPRUS

This follows Cyprus Cabinet’s announcement, in July 2019, that the Total-Eni consortium had been granted a licence for exploratory drillings in block 7, as well as Total being granted a licence for blocks 2, 3, 8 and 9, where Eni was already a licensee (https://in-cyprus.com/total-eni-consortium-awarded-licence-for-cyprus-offshore-block-7/).

The agreements were signed during a ceremony at the Energy Ministry, in Nicosia, by Cyprus Energy Minister, Mr. Giorgos Lakkotrypis and representatives of Total, Eni and the Korean company KOGAS, in the presence of Finance Minister, Harris Georgiades and the Ambassadors of France and Italy to Cyprus, Isabell Dumont and Andrea Cavallari, respectively (https://www.stockwatch.com.cy/en/article/energeia/cyprus-signed-contracts-eni-and-total).

With the signing of the agreements, Eni and Total currently hold exploration licenses for seven of Cyprus’ 13 blocks. On parallel lines, ExxonMobil and a partnership between Texas-based Noble Energy, Dutch Shell and Israeli Delek hold licenses for one block each.

It is important to note that the Cyprus Cabinet, also granted to the respective companies, 12-month extensions for blocks 2, 3, 9, 8 and 11 (https://in-cyprus.com/total-eni-consortium-awarded-licence-for-cyprus-offshore-block-7/).

Cyprus expects nine exploratory and appraisal wells to be carried out by the end of 2019 or beginning of 2020, and over the next 24 months (https://cyprus-mail.com/2019/09/18/cyprus-signs-contracts-with-eni-and-total-on-five-eez-blocks/).

Mr. Lakkotrypis stated, after the signing ceremony, that this is an “important development” in the island’s energy programme, and that the timing of the next round of exploratory drilling was currently being discussed with the energy companies (https://cyprus-mail.com/2019/09/18/cyprus-signs-contracts-with-eni-and-total-on-five-eez-blocks/).

Earlier this year, ExxonMobil and partners Qatar Petroleum, announced the discovery of a gas field in Block 10, in Glaucus-1 well, which is estimated to contain 5-8 trillion square feet of gas (https://news.exxonmobil.com/press-release/exxonmobil-makes-natural-gas-discovery-offshore-cyprus).

Cyprus is currently facing Turkey’s opposition to its energy plans. Ankara, through the Ministry of Foreign Affairs of Turkey, sent a warning to Nicosia, Total and Eni, on the 19th September 2019, not to commission hydrocarbon exploration in Block 7. In response to the statement, the Ministry of Foreign Affairs of the Republic of Cyprus noted today, on the 20th September, that the Turkish statement demonstrates Turkey’s utter disregard for conventional and customary international law (https://knews.kathimerini.com.cy/en/news/turkey-disregards-international-law-says-cyprus-mfa).